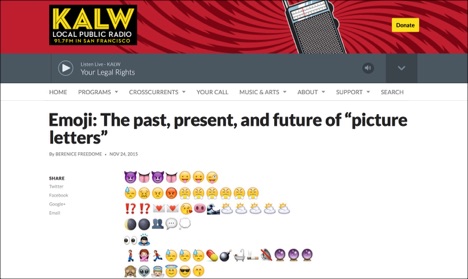 For the first time ever, the Oxford Dictionaries’ Word of the Year for 2015 was not a word, but an emoji. Specifically: 😂 To celebrate the past, present, and future of those irresistible little pictographs, here’s my first ever radio story on KALW Public Radio (91.7 FM in Northern California), featuring renown Game of Thrones Language Creator David J Peterson and special guests from Oakland International High School. (With a cameo by Bitmoji.)

Thanks to everyone at KALW for making work so playful. Special thanks to Chris Hoff for the creative sound design, and to Ben Trefny for great editing/ coaching, and for a stellar job of voicing my intro.

Addendum: In the story I reported that Facebook would introduce a ‘reactions button’ and three months later, it has appeared: